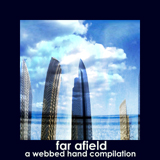 Somewhere in the spectrum between Musique Concrete and Phonography, is a vast gray area that is disowned and disputed by either side. This compilation treats this no-man's land as its playground.

Field recordings they are, with some processing, but not just walls of rhythmic noise. Sounds of nature, sounds of the city, using the non-instrumental rhythms and melodies of the source recording as the focal points, coaxing the music and beauty out of unplanned, un-orchestrated events. This 2-CD compilation was curated by Fred Yarm.

"The idea behind this compilation was to challenge phonographers and musicians to find a middle ground between their two crafts by sculpting field recordings into creative compositions without using traditional instrumentation (unless captured in the field). The terms passive to describe the phonographers process of capturing sound and active to describe the composers process were used; however, this sparked a great debate over how passive the phonographers craft is. In reality, phonography can be quite active in the choices of location and timing of the recordings, the placement and movement of the microphones, etc. However, in relative terms, the phonographers product is rarely as ordered as a musicians composition and a composers product utilizes sounds that are generated for his or her specific purpose. This compilation allotted the artists the opportunity to find a middle ground in the realm of musique concrete.

"The results that I received were astounding. The tracks represent everything from highly composed tracks telling stories or capturing the essence of far away locales to straight field recordings that the artist felt did not need any processing to demonstrate the beauty of the situation. Cracking ice on a lake, cicada songs, rusty gates, dripping water, moving trains, and a handful of other captured sounds provided the instrumental palettes for these compositions. Many thanks are to be given to the artists who accepted this challenge to coax such delightful music and beauty out of unplanned and un-orchestrated events. Their work far exceeded my expectations on many levels. In addition, I would like to thank C.P. McDill of Webbed Hand Records for his encouragement to initiate this compilation and for his efforts to see Far Afield into fruition."

Tracklist (Including URLs and contact info; this is a double-CD release):
First Disk

About the curator: Fred Yarm is a Boston-area experimental DJ, phonographer, theremin player, and sound artist. His discography and other information can be found on his website: http://www2.ennui.net/~yarm/

And if you like it, please leave us a review here at Internet Archive. Thanks!

Reviewer: sloblizard - favoritefavoritefavoritefavoritefavorite - May 16, 2006
Subject: simply fantastic
this is one of the best net label releases I've ever heard with a brilliant combination of pure music concrete and processed sounds. A set to take you to a wonderland both within and without. Top marks to webbed hand for putting this out and being a label all other labels should try and reach standard wise. I'm downloading the back catalogue now for more wonders like this and i think you should do the same

Reviewer: ton.strom - favoritefavoritefavoritefavoritefavorite - December 29, 2005
Subject: The Young Person`s Guide To Contemporary Field Music
This is another excellent compilation by the exciting netlabel "Webbed Hand Records", which describes its releases as "aimed at the ears of introverted mystics, dreamers, and lateral thinkers". The artists behind the lable are doing a great job by not only carefully chosing their regular releases, establishing what they call the "Webbed Hand Records-flavour", but also presenting very well chosen thematic compilations reflecting upon the history and present of varios styles in electronic music and the sonic arts.
Congrously the relese info of "Far Afield" does not speak of a responsible compiler, but a "curator". Rightly so! This is an audible counterpart to a wealthy art book or an exhibition, even though being decidetly completely free! The DJ Fred Yarm from Boston earned himself honors with this great accomplishment. He presents us pieces by 32 artists, whose approach to the given guidelines is as creative as different.
The concpept is to work upon the "grey area" between two different aspects of artistic work with field recordings and environmental sounds. On one hand there is phonography, which puts the creative emphasis onto the actual process of recording a soundevent. In this aspect phonography might be considered comparable to photography, with positioning of the microphone(s) into the soundscape, fixed or moving, and the actual recording being opposed to a photographer`s and use of lenses and positioning of the camera. On the other hand there is musique concrete, which also uses field recordings, but as raw material for actual musical compositions. Sounds very often appear highly altered and processed, the main creative process starts after recording. According to the artist`s perspective the pieces on "Far Afield" put emphasis either on one, or the other approach, but using their task was to use techniques from both schools.
Just to mention a few more or less random pieces: The opening track by Quiet American uses sounds recorded at Khulna Station in Banghla Desh. Even though his sounds are almost always easy to recognize, his creative cutting and layering techniques present us a vivid, musical picture from that place. The rhythm of the trains being a kind of refrain and central motif, other sounds, such as horns and a cut-up loudspeaker etc are used to establish a formal structure of the first part of the piece which is conentrating on sounds from the station itself. The slower second half, after the climax, closes with the station's outer surroundings, with a beautifully multilayered combination of different recordings of a muezzin and people before returning to the the main motif of the trains for the end. This is a very well chosen intro, being very well done and extremely catchy while introducing the compilation's field of exploration.
Many other pieces demand much more from the unexperienced listener, as pieces of art they require concentrated listening. Yet it can be very rewarding, if not entertaining, trying to identify the different sound sources, to discover how they are used and where both artistic worlds meet. Maybe a few pieces putting the emphasis on phonography might serve best as entry points: Carlo Giordani's "Valle Rossa", Raphael Lyon`s "Virginia Beach", Aaron Lewis` "Long Pond 2/1 10 am", Eric Bollmann's "14th Street" or Archive`s "Imprint", a piece I personally find very beautiful consiting of footprints in snow.
This truely is a kind of "Young Person`s Guide To Contemporary Field Music". Another reviewer used similar words in his review, and I can do nothing but wholeheartedly agree.


Reviewer: mystified - favoritefavoritefavoritefavoritefavorite - June 7, 2005
Subject: Fabulous
This 2 cd set is quite fabulous. With the comforting crackle and pop of real recordings combined with the magic of skilled composers, hear the world take on new and exciting shapes before your very ears. There is a lot of super material here and of course it is all free. How could that be? So get to downloading!

Reviewer: zeromoon - favoritefavoritefavoritefavorite - June 1, 2005
Subject: A Young Person's Guide to Field Recordings +
Overwhelming at first, its a great introduction to the art known as field recordings. I found the pieces that were more processed/restructured more compelling than the recordings which were straight documents of an environment. After a while water dripping/gurgling/babbling starts to sound all the same (like pop music). Great to listen to on a long walk outdoors...let the sound mingle with your environment. Kudos to the curator for track selection and order. Good flow.